The Car GuideNewsRolls-Royce Wraith, Dawn to be Axed From North American Lineup

High-end luxury car buyers will soon have two fewer options to choose from. Rolls-Royce has announced that the Wraith coupe and Dawn convertible will no longer be offered in North America after the 2021 model year.

A company spokesperson confirmed the news to Road & Track, putting an end to rumours and unverified reports that started to spread across the web.

No direct replacement is currently planned for either model. Customers who have already placed an order will all get their car.

Rolls-Royce doesn’t break down sales numbers, but Automotive News Data Center estimates that the brand sold 648 cars in the U.S. and 60 in Canada in 2020 when combining the Wraith, Dawn, Phantom and Ghost.

The Wraith originally debuted as a 2014 model and the Dawn followed three years later. Both ride on BMW Group’s F01 platform, the same one that underpinned the previous-generation BMW 7 Series. They will continue to be sold in markets overseas, at least in the foreseeable future.

Out here, Rolls-Royce customers will be forced to turn to four- and five-door models, namely the Ghost and Phantom sedans along with the Cullinan SUV, which share an all-aluminum “Architecture of Luxury.”

Expansion plans for Rolls-Royce’s portfolio will be announced at a later date.

Bad Times Continue for the Chevrolet Equinox
General Motors’ CAMI assembly plant in Ingersoll, Ontario has been on idle since February 8 and it will remain that way through at least the week of June 28, an interruption of nearly five months. This is where the Equinox compact SUV, an important product for Chevrolet , is manufactured.
Recalls

Kia Seltos, Forte, Soul Recall Hits 20,000 Units in Canada
Kia Canada is announcing a recall on the all-new 2021 Seltos as well as the 2020-2021 Soul and 2020 Forte . Nearly 20,000 units are affected. It’s the first time the Seltos, which hit the market about a year ago, has been recalled. The problem is found in the naturally …
Buzz 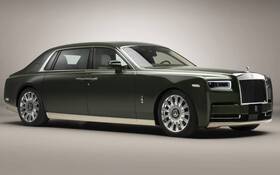 Phantom Oribe: When Rolls-Royce, Hermès and Japanese Tradition Collide
While most of us see a Rolls-Royce as one of the few vehicles that represent the pinnacle of luxury on wheels, others believe that a normal, off-the-lot Rolls is just not enough. That’s why the Rolls-Royce Bespoke division has been quite busy these last few years, catering to a very …
News

Tesla CyberLandr Orders are Already Through the Roof
While the first deliveries of the Tesla Cybertruck have been pushed back to 2022, a heck of a lot of people are showing interest in Elon Musk’s Blade Runner -inspired electric pickup. Need more proof? On April 6, a company in Las Vegas called Stream It unveiled an innovative camper/overlander …
News