Volkswagen has long hesitated to offer a small SUV below the Tiguan in North America (the Golf Alltrack notwithstanding) and it recently decided not to bring the eighth-generation Golf to our shores, but the company is confident that the all-new 2022 Taos that was officially unveiled on Tuesday night will quickly make a name for itself and win over many customers.

“Taos joins our lineup at an ideal time,” said Pierre Boutin, President and CEO of Volkswagen Group Canada. “It offers Canadians all the style, technology, and drivability that Volkswagen is known for at a more affordable price than our popular Tiguan.”

What about the shorter-wheelbase Tiguan that is currently sold overseas? It all comes down to cost. The Taos will be manufactured in Puebla, Mexico, alongside the Jetta and the regular-wheelbase Tiguan we already know. It’s a similar vehicle to the Tarek offered in South America; Volkswagen made a few key changes and used the name “Taos” after the city in New Mexico.

When it comes to interior volume, the Taos offers 2,817 litres of room for passengers (only 45 litres less than the two-row Tiguan) and 795 litres of cargo room in the trunk. If you fold the 60/40-split rear seats, you get a generous 1,877 litres.

Styling is reminiscent of other Volkswagen SUVs including the Tiguan, of course, but also the larger Atlas and Atlas Cross Sport. There are distinctive touches like the headlights (with standard LEDs), the light strip on the grille (select models only) and the nameplate on the front fenders and rear hatch (something future SUVs from the German brand will adopt, too). There are eight body colours to choose from along with 17-, 18- and 19-inch alloy wheels.

The cabin of the Volkswagen Taos may not be revolutionary—or remotely close to the futuristic cockpit of the fully electric ID.4 unveiled a few weeks ago—but it still looks very nice. The dashboard is typically horizontal and blends in with the door panels. The two-tone layout is emphasized by the seats, which can be appointed in either cloth, leatherette or real leather. The 6.5-inch centre touchscreen (or optional 8-inch unit) is complemented by an 8-inch digital instrument cluster in front of the driver.

As previously reported, the 2022 Volkswagen Taos rides on the MQB platform, which the German automaker uses for multiple applications. However, it stands out with a new turbocharged 1.5-litre engine derived from the Jetta’s 1.4-litre mill.

Rated at 158 horsepower and 184 pound-feet of torque, the 1.5T engine features a modified version of the Miller cycle, where the intake valves are closed early in the induction stroke to help with fuel economy. For a turbocharged engine, it has a very high compression ratio of up to 11.5:1. Also helping with efficiency is variable turbine geometry—Volkswagen’s first volume-production turbocharger with this technology in North America—and a map-controlled cooling module that warms the engine more quickly.

The Taos will be mated to an eight-speed automatic transmission with Sport mode in FWD configuration. Models equipped with the 4MOTION AWD system (optional on Trendline and Comfortline, standard on Highline) will receive a seven-speed dual-clutch transmission instead.

Canadian pricing will be announced closer to the 2022 Volkswagen Taos hitting the market next summer. Expect a base price that’s halfway between the outgoing Golf ($22,570) and the current Tiguan ($29,770).

This Tesla Model S Has Racked up 1.2 Million Kilometres
Electric cars are the future, but as they now work to gain mainstream popularity it seems like people only care about their numbers—range, charging times, price and incentives. Here’s one figure that should not fail to impress: 1,200,000. That’s the number of kilometres logged by a Tesla Model S in …
Electric 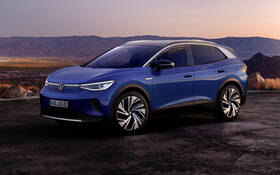 2021 Volkswagen ID.4 to Arrive in Canada Early Next Summer
Volkswagen’s great big EV shift has begun. Some $50 billion will be invested by 2024 and no fewer than 75 all-electric models will debut globally by 2029. The Volkswagen ID.3 unveiled last year and now on sale in Europe technically kicked things off, but it’s the Volkswagen ID.4 that will …
Hybrid/Plug-in Hybrid

2021 Ford F-150 Hybrid Rated at Under 10 L/100 km
The specs for the all-new 2021 Ford F-150 were finally announced a couple of weeks ago including power, torque, payload and towing capacity. Now, we know how much fuel it burns as calculated by Natural Resources Canada. And this goes for the first-ever F-150 Hybrid, too. Before going any further, …
Electric

2021 Tesla Model 3 Gets Many Upgrades, Longer Range on All Trims
The eagerly anticipated refresh to the Tesla Model 3 for 2021 has arrived. The changes can be seen inside and out as well as under the hood. They are also reflected on the company’s online configurator. Where shall we start? Since the name of the game for electric cars is …
Electric