Remember the sensational new Toyota GR Yaris? Of course you do. We told you about it just over a month ago following its premiere at the Tokyo Auto Salon in Japan.

This hot little rocket, developed by the same engineers who gave us the formidable GR Supra, boasts the world’s most powerful three-cylinder engine, rated at 268 horsepower and 273 pound-feet of torque. Acceleration from 0-100 km/h is achieved in just 5.5 seconds. And on top of that, the car even has a manual transmission and all-wheel drive!

Despite an online petition launched by fans, Toyota will not offer it in North America. Instead, we get a re-badged Mazda2. Yeah, that sucks.

However, the company’s executive vice president of sales, Bob Carter, has told Car & Driver magazine that there’s "an answer" that's better tailored to drivers on this continent, though he wouldn’t elaborate much.

Is a GR Corolla Hatchback coming here? That’s our understanding based on this statement. Earlier this month, British publication Auto Express claimed the car would launch in 2023 with a 250-horsepower version of the turbocharged triple (others, like Road & Track, have suggested a juiced-up C-HR).

Similar to the new Yaris sold in Japan and Europe, the Corolla rides on Toyota’s global TNGA platform. It’s not particularly exciting to drive and the most potent engine on offer is a naturally aspirated four-cylinder rated at 169 horsepower. And as you know, all-wheel drive is not available.

Ontario's Reopening Plan Includes Speedways, Driving Schools
While new modelling suggested keeping some measures until June, Ontario Premier Doug Ford announced details Thursday for a new three-step reopening plan , as the province continues to see signs of recovery from a third wave of the COVID-19 pandemic. A three-step plan has been laid out to gradually reopen …
New Models

It’s Official, Toyota Corolla Cross to Become Canada’s Latest Small SUV
Toyota is finally filling a void in its North American lineup between the city-oriented C-HR small crossover and the hugely popular RAV4 compact SUV. Initially revealed in Thailand last summer, the Toyota Corolla Cross will land in Canada in the third quarter of this year as a 2022 model. Sharing …
News

CBC: 400,000 road tests cancelled in Ontario since start of pandemic
Soon-to-be drivers are anxiously waiting for the privilege to take the wheel by themselves in Ontario. A report from the CBC stipulates that the backlog to conduct G2 road tests is so bad, that it might not be cleared until 2022. Driving schools have been closed as the province has …
New Models

1,914-hp Rimac Nevera Arrives Like a Storm, Hits 0-100 km/h in Under 2 Seconds
Croatian hypercar maker Rimac, which is partly owned by Porsche, has finally unveiled the production version of the sensational C_Two concept that first made its debut at the 2018 Geneva Motor Show. It’s called Nevera after the quick, unexpected and mighty Mediterranean storm that races across the open sea off …
New Models 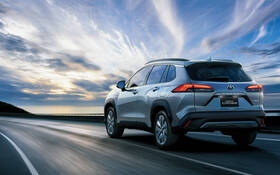 Toyota Corolla Cross Gets Closer to Landing in Canada
Unveiled in Thailand last summer, the all-new Toyota Corolla Cross is a model that has many people intrigued on this side of the planet. At a time when SUVs and crossovers are all the rage, the Japanese automaker has yet to offer North American customers something that would fill the …