Exactly one year ago, Toyota abandoned its plan to build the Corolla at a new assembly plant shared with Mazda in Huntsville, Alabama beginning in 2021. Instead, the Japanese giant envisioned making a brand new SUV that’s currently not part of the lineup and would slot between the C-HR sub-compact crossover (which is FWD only) and the extremely popular RAV4 compact SUV.

Many believed it would be the production version of the FT-4X concept introduced at the 2017 New York Auto Show. However, it now appears this new model will actually be something like the Toyota Corolla Cross that’s just been introduced in Thailand.

Similar to what it did with the Yaris Cross in Europe, the automaker created an SUV that’s loosely based on its compact sedan. The Corolla Cross stands approximately 4.45 metres long, 1.83 metre wide and 1.62 metre tall, making it a tad larger than the C-HR although the wheelbase is identical (2.64 metres).

Cargo capacity is rated at 440-487 litres depending whether there’s a spare tire or not, but these numbers are probably calculated using Asian-market specifications. It’s reasonable to assume the trunk is slightly larger than that of our C-HR (538 litres).

In terms of styling, the Toyota Corolla Cross is much closer to the RAV4 given its overall shape, grille and muscular fenders. It also adds a dose of creativity—just look at the headlights, for instance. The lower body and wheel arches feature black plastic cladding for a more rugged appearance.

In Thailand, a hybrid powertrain will be available combining an Atkinson-cycle, four-cylinder engine producing 98 horsepower and an electric motor supplying 72 horsepower. We’re not sure it would come to North America, although the RAV4, Highlander and the upcoming Venza all offer a hybrid system (the last one as standard).

The other option is a conventional four-cylinder engine that delivers 140 horsepower and 129 pound-feet of torque, which is pretty much what we’re used to with small SUVs sold here. All-wheel drive would be optional.

The possible launch of the Toyota Corolla Cross (or whatever name it ends up with) on our shores could happen by mid-2021, creating new competition for the Honda H-RV, Subaru Crosstrek, Hyundai Kona, Nissan Qashqai, Mazda CX-30, Kia Seltos and others.

2022 Honda Civic to Reportedly Debut Next Spring
So, when will we see a brand new Honda Civic ? A lot of enthusiasts and customers want to know. After all, it’s still the best-selling car in Canada and the current (tenth) generation is about to enter its sixth year on the market after launching for 2016. Multiple sources …
Hybrid/Plug-in Hybrid

Jeep Wrangler 4xe to Arrive in Dealerships Late in 2020
The upcoming Jeep Wrangler 4xe , the plug-in hybrid variant of the iconic American four-wheeler, will have its global debut this fall. The start of production and deliveries will also take place by the end of the year. That’s part of the plan FCA detailed in its Q2 2020 financial …
News 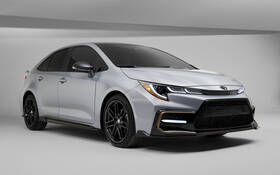 2021 Toyota Corolla Apex Adds Style and Corner-carving Capability
Toyota is introducing a special edition of the Corolla SE for 2021. Meet the Corolla Apex Edition, limited to just 150 units in Canada. As you know, drivers on a track aim to “clip the apex” of a corner to achieve the quickest lap times. This model was developed and …
New Models

Meet the Toyota Corolla Cross That May be Headed for Canada
Exactly one year ago, Toyota abandoned its plan to build the Corolla at a new assembly plant shared with Mazda in Huntsville, Alabama beginning in 2021. Instead, the Japanese giant envisioned making a brand new SUV that’s currently not part of the lineup and would slot between the C-HR sub-compact …
Hybrid/Plug-in Hybrid

Mazda MX-30 to Offer Mild Hybrid Option
We’re still waiting to find out if the all-new Mazda MX-30 , the brand’s first series-produced electric vehicle, will be sold in Canada. Honestly, the chances are rather slim. However, Mazda has just announced another variant of the MX-30 featuring a mild hybrid system—the same that’s currently available with Mazda3 …