As previously reported, Toyota is expanding the Corolla lineup for 2022 with the addition of a small SUV variant called Corolla Cross. That model will join the sedan (gasoline and hybrid) and the hatchback to give customers even more selection and versatility.

The Car Guide was invited to attend a static demonstration of this new vehicle that will inevitably enjoy a lot of success across the country.

Right off the bat, the folks at Toyota Canada told us they wanted to capitalize on the Corolla name. Slotting between the C-HR and the extremely popular RAV4, the Corolla Cross uses the same 2.0-litre four-cylinder engine that’s available in the sedan and hatchback. Depending on the configuration, a continuously variable transmission sends power to the front wheels or, optionally, all four.

Likewise, the TNGA-C platform is the same. FWD models ride on a torsion-beam rear suspension while AWD models get an independent setup instead. Towing capacity, in case you need to pull a trailer, is rated at up to 1,500 pounds.

Three trim levels are planned at launch including L, LE and XLE. Production will take place at a new Toyota-Mazda assembly plant in Huntsville, Alabama.

As for fuel consumption, Toyota claims the Corolla Cross will achieve 7.4-7.8 L/100 km depending on the drivetrain.

Surprisingly, no hybrid model is offered in Canada. Could a Corolla Cross Hybrid join the family at some point in the future? You bet. In fact, Toyota is confirming it. More upscale trim levels and possibly a Nightshade Edition could follow, as well.

The 2022 Toyota Corolla Cross will go on sale in October. Canadian pricing has yet to be announced.

2022 Subaru WRX is Stiffer, Sharper and Blessed With a New Turbo
Subaru today unveiled the all-new, fifth-generation 2022 WRX, the first to be built on the Subaru Global Platform. It will go on sale early next year. In typical Subaru fashion, the evolution is fairly conservative. The body and hood scoop are a bit wider to give the WRX a more …
Hybrid/Plug-in Hybrid 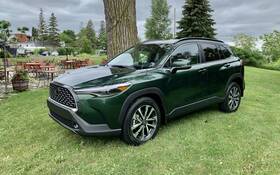 Toyota Corolla Cross Hybrid is Confirmed, But There’s a Catch
Officially unveiled in June and slated to go on sale in October, the all-new Toyota Corolla Cross (we still can’t get over that name) will in fact be available with a hybrid variant. There’s just one problem: customers will have to wait a year or so. The plan is to …
Comparative Tests

2023 Nissan Z vs. 2022 Toyota GR Supra: The Numbers
The Toyota GR Supra is great but Nissan wants to fight back with the next-generation Z , which was officially unveiled a few weeks ago. These two uniquely styled sports coupes have very similar technologies and performance attributes. Should you buy a Supra now or wait for its rival to …
First Drives

2022 Jeep Grand Wagoneer: Grand Return
As strange as it may seem in this day and age, full-size SUVs are increasingly popular. In 2019, before the pandemic, they were one of the fastest-growing segments in the industry, led by GM’s revamped trio. Also, demand for capable SUVs that can tow heavy loads, haul lots of stuff …
News

Law Against “Phantom Vehicles” Coming Into Effect This Month
It’s been three and a half years since Transport Canada proposed new safety regulations to combat so-called “phantom vehicles” on the road. Beginning this month, the Canadian Vehicle Lighting Regulation will require that all new vehicles sold in the country must be visible in low-light conditions. What does it mean?