The WRX STI is Subaru’s halo car and its most desirable product—at least in the eyes of sporty driving enthusiasts.

A bit less flashy and not quite as sophisticated from a technical standpoint, the base WRX is still a treat, not to mention that it’s perfectly suited to Canadian weather. We’ve recently put one to the test in Sport-tech RS trim.

This top-line WRX model stands out with key upgrades such as Brembo brakes featuring four-piston front and dual-piston rear callipers painted in red, plus heated Recaro front buckets wrapped in leather and ultrasuede. It’s also exclusively available with a six-speed manual transmission, whereas the WRX Sport-Tech can be had with a CVT.

The engine in all of them is a turbocharged 2.0-litre four-cylinder boxer that produces 268 horsepower and 258 pound-feet of torque.

As a real driver’s car slotting just below the almighty STI, the WRX Sport-Tech RS is fairly expensive, with pricing that starts at $41,658 (freight and delivery included). Consider that the 310-horsepower WRX STI retails from $42,258, so the gap between the two is pretty small.

The Good and the Bad on the Road

Manual sports cars are increasingly rare nowadays. Heck, you could say they’re an endangered species. We’re glad the Subaru WRX still offers one, even though the shifter has excessively long throws.

The transmission itself has tight ratios and helps deliver strong acceleration… provided that you make the most of the torque curve. It makes you feel in control and is much more rewarding than any automatic—CVT or other. Sadly, rowing your own gears is becoming a lost art.

Other complaints include a relatively stiff ride and noisy cabin, although you can fix the latter by cranking up the volume of the nine-speaker Harman Kardon audio system featuring a subwoofer and 320W amplifier.

As mentioned earlier, the WRX isn’t quite as flashy as the STI in terms of styling, but there’s still that big hood scoop to remind everyone that this car means business.

The interior has a cockpit feel, especially with the 5.9-inch LCD display showing turbo boost pressure, engine vacuum and peak boost value readouts at the top of the centre stack.

The 2022 model year should logically bring a next-generation WRX (and WRX STI) based on the Subaru Global Platform that underpins all of the company’s latest vehicles.

Rumour has it that a variant of the turbocharged 2.4-litre engine found in the new Legacy, Outback and Ascent will be part of the equation, likely with revised internals and a larger turbo. There’s even talk that the STI could generate upwards of 400 horsepower to keep pace with the next Volkswagen Golf R, which will reportedly get a massive boost in power, as well.

We expect the six-speed manual gearbox to carry over on both, with the base WRX also offering a CVT. Until then, look for some limited-edition models such as the recently unveiled 2020 WRX STI Kanrai (75 units in Canada).

The Subaru WRX is a performance car that’s incredibly at ease in low-grip conditions and always a joy to drive. The tradeoff is sub-par comfort and SUV-like fuel consumption. Styling is not everyone’s cup of tea, too.

But since we live in a world where fun and affordable sports cars are becoming harder to find, we’re just happy Subaru is keeping the WRX alive. 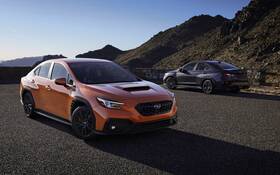 2022 Subaru WRX is Stiffer, Sharper and Blessed With a New Turbo
Subaru today unveiled the all-new, fifth-generation 2022 WRX, the first to be built on the Subaru Global Platform. It will go on sale early next year. In typical Subaru fashion, the evolution is fairly conservative. The body and hood scoop are a bit wider to give the WRX a more …
Comparative Tests

2023 Nissan Z vs. 2022 Toyota GR Supra: The Numbers
The Toyota GR Supra is great but Nissan wants to fight back with the next-generation Z , which was officially unveiled a few weeks ago. These two uniquely styled sports coupes have very similar technologies and performance attributes. Should you buy a Supra now or wait for its rival to …
Hybrid/Plug-in Hybrid

Toyota Corolla Cross Hybrid is Confirmed, But There’s a Catch
Officially unveiled in June and slated to go on sale in October, the all-new Toyota Corolla Cross (we still can’t get over that name) will in fact be available with a hybrid variant. There’s just one problem: customers will have to wait a year or so. The plan is to …
First Drives

2022 Jeep Grand Wagoneer: Grand Return
As strange as it may seem in this day and age, full-size SUVs are increasingly popular. In 2019, before the pandemic, they were one of the fastest-growing segments in the industry, led by GM’s revamped trio. Also, demand for capable SUVs that can tow heavy loads, haul lots of stuff …
Tires

Top 10 : Best Winter Tires for Cars and Small SUVs, 2020-2021
We were lucky enough to do our latest winter tire tests in February 2020 just before the COVID-19 pandemic hit North America and put car makers and dealers on lockdown. With compact SUVs being the most popular vehicles on the market, we used a Nissan Rogue and Honda CR-V as …