The Car GuideNewsElectricNissan LEAF to be Replaced by Small Electric Crossover

Before the all-new Nissan Ariya electric SUV even goes on sale, the Japanese automaker said that a smaller utility vehicle would follow. Now we have confirmation that this model will replace the LEAF hatchback.

Nissan’s European boss, Guillaume Cartier, said as much in an interview with Autocar.

The LEAF is currently built at three different plants in Japan, the U.K. and the U.S. (Tennessee). The second generation will bow out around mid-decade, after which the aforementioned small electric crossover will take over. Annual production is expected to reach 100,000 units, though it’s not clear yet which sites will support the British factory for global markets outside of Europe, including Canada.

The vehicle will be based on the Renault-Nissan-Mitsubishi Alliance’s CMF-EV platform. Other details are not publicly known at this point. Nissan promises to release more information later this fall.

There are no cosmetic or technological updates over the 2021 model, mind you. The 2022 LEAF returns with the same 40-kWh and 62-kWh batteries providing a range of 240-363 kilometres.

Meanwhile, the 2022 Nissan Ariya is roomier, more modern and more sophisticated all around. Initially set to go on sale in the second half of this year, it’s now been pushed to early 2022. Pre-orders in Canada have not begun yet and pricing is still to be determined.

Available with a choice of 63-kWh and 87-kWh batteries, the Ariya can travel an estimated 321-482 kilometres with a full charge. AWD is optional, just like ProPILOT Assist 2.0 which enables semi-autonomous driving on the highway.

This model will rival the likes of the Volkswagen ID.4 and Ford Mustang Mach-E, just to name a few.

Top 10: Best Winter Tires for Cars and Small SUVs, 2021-2022
Setting up our winter tire evaluations at the end of last winter wasn’t easy due to the various COVID-19 measures. With a curfew still in effect, we had little time during the day to get to our locations. Furthermore, we had to move some of the testing to the Outaouais …
Electric

Tesla Model 3 Prices Go Up, Federal EV Rebate No Longer Applies
Tesla Canada’s latest decision won’t please many potential Model 3 customers. The base price for the single-motor RWD variant has been raised to $59,990, making it ineligible to the $5,000 federal rebate for electric vehicle. Remember, the Canadian government’s iZEV Program sets a maximum MSRP of $45,000 for vehicles with …
New Models

All-new 2023 Mazda CX-50 Arrives as a More Rugged CX-5
Mazda ’s plan to expand its SUV and crossover lineup today became a bit clearer with the introduction of the all-new 2023 Mazda CX-50, which is primarily designed for adventure and off-road driving enthusiasts. The Car Guide had unique access to the vehicle during a special presentation in Toronto. Here’s …
News

2022 Toyota Tundra Pricing Announced for Canada
After more than a decade without any major changes, the Toyota Tundra is completely redesigned and improved for 2022. As a reminder, the old 5.7-litre V8 engine has been replaced by a brand new, twin-turbocharged 3.5-litre V6 which can optionally be paired with an electric motor. And just like every …
News 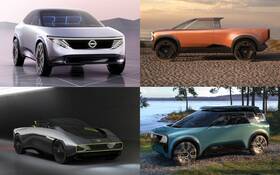 Four New Nissan Concepts Show Four Visions of the Future
While announcing its new electrification plan today, which calls for the launch of 23 new models globally by 2030 including 15 battery electric vehicles, Nissan unveiled four different concepts that show four different visions of automobiles in the future. Each one is aimed at a specific type of customer and …