The Car GuideNewsIs Rubber the Next Shortage Threatening the Auto Industry?

After hybrid and EV batteries, semiconductors, select metals and even seat foam, the auto industry could rapidly be facing a shortage of tires. Global rubber supplies are running critically short, some analysts warn.

Demand for rubber gloves and packaging tape has increased significantly during the pandemic, and supply has also been depleted by drought, floods and a leaf disease in the top-producing countries such as Thailand and Vietnam.

Meanwhile, as the world’s biggest auto market and top consumer of natural rubber, China took advantage of low rubber prices and a recovery in its economy last year to make substantial purchases. There are currently no stockpiles in North America, where some auto suppliers are scrambling to secure shipments before the market gets squeezed further.

It’s kind of like paper towels early on during the COVID-19 pandemic.

Remember that rubber is also used to make seals, mounts and anti-vibration components in vehicles.

Ford and Stellantis (formerly known as FCA) have told Bloomberg they’re monitoring the rubber situation but have yet to be impacted. General Motors says it isn’t worried about its rubber supply for now.

“It’s definitely tightening up,” according to a spokesperson for Foley and Lardner LLP, which represents auto parts manufacturers. “It’s nowhere near the level of the chip shortage from our perspective so far, but it’s definitely brewing.”

Natural rubber prices recently hit a four-year peak at about $2 a kilogram and could top $5 in the next five years, people in the industry have admitted.

Kia Seltos, Forte, Soul Recall Hits 20,000 Units in Canada
Kia Canada is announcing a recall on the all-new 2021 Seltos as well as the 2020-2021 Soul and 2020 Forte . Nearly 20,000 units are affected. It’s the first time the Seltos, which hit the market about a year ago, has been recalled. The problem is found in the naturally …
News 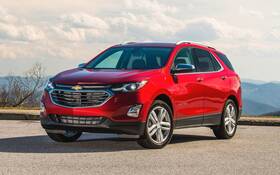 Bad Times Continue for the Chevrolet Equinox
General Motors’ CAMI assembly plant in Ingersoll, Ontario has been on idle since February 8 and it will remain that way through at least the week of June 28, an interruption of nearly five months. This is where the Equinox compact SUV, an important product for Chevrolet , is manufactured.
Buzz

Phantom Oribe: When Rolls-Royce, Hermès and Japanese Tradition Collide
While most of us see a Rolls-Royce as one of the few vehicles that represent the pinnacle of luxury on wheels, others believe that a normal, off-the-lot Rolls is just not enough. That’s why the Rolls-Royce Bespoke division has been quite busy these last few years, catering to a very …
Racing

Meet NASCAR’s Next-Gen Camaro, Camry and Mustang
Chevrolet , Toyota and Ford have just unveiled their next-gen cars for the 2022 NASCAR Cup Series. They will all make their race debuts at the Daytona 500 next February. The three manufacturers have largely redesigned their cars to make them much more similar to their road-going production counterparts—the Camaro …
News