True to its word, Toyota is adding a hybrid variant of the Corolla Cross for the 2023 model year.

The vehicle is estimated by the manufacturer at 6.4 L/100 km. Natural Resources Canada has yet to post its official rating, but the number should be similar. For the record, the non-hybrid 2022 Corolla Cross achieves a combined 7.3 L/100 km in FWD configuration and 7.8 L/100 km with AWD.

In terms of performance, output is increased to 194 horsepower, allowing the Corolla Cross Hybrid to sprint from 0-100 km/h in 8.2 seconds – slightly quicker than the 169-horsepower gas variant. Engine displacement and battery capacity are not specified at this time, however.

The 2023 Toyota Corolla Cross Hybrid stands out with a revised front grille that features black trim around the Toyota logo, plus a “Hybrid” badge in the rear. Overall, it looks pretty much the same as the regular Corolla Cross.

The lineup includes two new grades: SE and XSE. The former boasts 17-inch alloy wheels, an eight-inch touchscreen and LED lighting at both ends, while the latter gets 18-inch wheels, premium headlights, Softex-trimmed seats and more. All models feature AWD.

Pricing for the 2023 Toyota Corolla Cross Hybrid will be announced later. The 2022 model starts at $27,279 including freight and PDI.

All-Electric Fisker Ocean Starts at $43,999 in Canada
Introduced in production form last fall, the all-new Fisker Ocean electric crossover can now be pre-ordered by reservations holders in Canada. We also know how much it costs. There are four trim levels to choose from including Sport, Ultra, Extreme and One (launch edition). The Ocean Sport starts at $43,999, …
News

GMC Unveils 2023 Canyon With New AT4X Model
Things are getting hot right now in the mid-size pickup segment. Last week, we covered the unveiling of the 2023 Chevrolet Colorado , which came with new styling, a new engine with several power levels and a revamped cabin. Its GMC counterpart, the Canyon, followed this week with a similar …
News

Dodge’s Hellcat V8 Rumoured to Get 909 Hp in Final Iteration
As we all know, the supercharged 6.2-litre Hellcat V8 mostly found in Dodge vehicles will not be back after 2023 due to increasingly stringent emissions regulations. All good things must come to an end, right? In the meantime, the company hopes to appease and please hardcore Dodge enthusiasts with at …
New Models 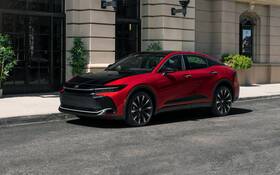 2023 Toyota Crown is the Avalon Replacement You Never Expected
After eliminating the Avalon in Canada for 2022, Toyota will do the same in the U.S. for 2023. That makes perfect sense—consumers no longer seem to care about conventional full-size sedans. However, the automaker has found a surprising and intriguing replacement. Meet the all-new 2023 Toyota Crown! A Sedan for …
Tires

Top 10: Best Winter Tires for Cars and Small SUVs, 2021-2022
Setting up our winter tire evaluations at the end of last winter wasn’t easy due to the various COVID-19 measures. With a curfew still in effect, we had little time during the day to get to our locations. Furthermore, we had to move some of the testing to the Outaouais …