The Honda CR-V is the second most popular SUV on the market (behind the Toyota RAV4) and many customers are eagerly awaiting the next generation. Remember, for the first time ever, it will be available as a hybrid in Canada.

That model is in fact featured in the first official teaser for the new 2023 Honda CR-V released today.

The pictures show a completely redesigned front end including a new bumper with revised intakes, a larger and more rugged-looking grille, as well as slimmer headlights. Overall, the design is slightly different and more attractive than the Chinese-spec variant that surfaced online several days ago.

In the rear, the taillights sport a fresh new look but continue to stretch vertically and horizontally. The bumper is more prominent and nicely integrates the exhaust tips, while the CR-V badge remains in the lower left corner of the liftgate instead of moving to the upper centre like we see on a growing number of vehicles. The spoiler at the top seems to be a bit bigger, but the rear window is still relatively small.

We don’t have any other details to share with you, although Honda promises increased versatility, more capability and a sportier driving experience. The optional hybrid system will be more advanced than the one found on the CR-V Hybrid south of the border, which generates 212 horsepower and achieves about 5.9 L/100 km in the city.

The official debut of the 2023 Honda CR-V should take place in a few weeks ahead of the start of sales this fall. The smaller HR-V and larger Pilot will both be redesigned for 2023, as well. As usual, keep following The Car Guide to make sure you don’t miss anything. 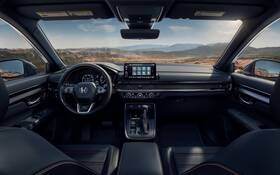 Honda Shows 2023 CR-V Interior Ahead of July 12 Debut
We pretty much know what the next-generation Honda CR-V will look like thanks to leaked patent drawings plus an official teaser provided by the company a few weeks ago. The new CR-V will go on sale in the second half of this year as a 2023 model. Ahead of its …
Electric

2023 Chevy Bolt EV, Bolt EUV Won’t Get Big Price Cuts Like in the U.S
After significantly lowering the price of the Chevrolet Bolt EV on both sides of the border for 2022, including $6,800 in Canada, General Motors has decided to do the same for the 2023 model year, but in the U.S. only. Over there, the Bolt EV’s base MSRP is down by …
Electric

1,973-Hp Ford Pro Electric SuperVan is Super-Fast, Super-Cool
Has Ford gone mad? Today at the 2022 Goodwood Festival of Speed in the U.K., the automaker unveiled the Ford Pro Electric SuperVan, an ultra-high-performance EV van concept that was developed in secret by Ford Performance and the electrified rally and racing specialists at STARD in Austria. For those who …
Hybrid/Plug-in Hybrid

Honda Confirms New Civic Hybrid for North America
It’s official: Honda has finally decided to offer a Civic Hybrid in Canada for the first time since 2015 . The automaker confirmed the news today while sharing some details on the next step in its electrification strategy in North America, which includes hybrid variants of the brand’s best-selling products.
News

Volkswagen Golf R to Get Its Own Special Edition in Canada
The completely-new-for-2022 Volkswagen Golf R is an impressive hot hatch for many reasons. In fact, along with the Golf GTI, it won The Car Guide ’s Best New Car of the Year award for 2022. Earlier this week, the German automaker announced a special edition celebrating the 20 years the …