The 2022 World Car of the Year (WCOTY) awards were announced during a special ceremony today at the New York International Auto Show. The all-new Hyundai IONIQ 5 was the clear winner, taking home three of the six awards.

In the World Car Design of the Year category, the IONIQ 5 beat the Audi e-tron GT and Kia EV6.

The World Urban Car of the Year award was given to the Toyota Yaris Cross over the two other finalists, the Opel Mokka and Volkswagen Taigun. None of these models are sold in North America.

In the World Performance Car of the Year category, the e-tron GT defeated a pair of duos including the BMW M3/M4 as well as the Toyota GR 86/Subaru BRZ.

For the World Luxury Car of the Year award, the jury picked the all-electric Mercedes-Benz EQS. The other finalists were the BMW iX and Genesis GV70.

The World Electric Vehicle of the Year category was a new addition for 2022, and as mentioned above the IONIQ 5 secured the award instead of the e-tron GT and EQS.

Finally, the IONIQ 5 got the nod over the Ford Mustang Mach-E and Kia EV6 as the overall 2022 World Car of the Year.

Who Votes for the WCOTY Awards?

I have the incredible honour of being one of four Canadian representatives this year along with The Globe and Mail’s Mark Richardson, Autoguide.com’s Sami Haj-Assaad and Autonerve’s Regina Chan.

Dodge Files to Trademark Tomahawk Name, But What is it For?
Summer is going to be hot and exciting for Dodge and its fans, especially around mid-August. As part of a multi-day event called “Dodge Speed Week” in Pontiac, Michigan, the brand will host three worldwide premieres. These include “current muscle announcements” (possibly a final celebration of the combustion engine), a …
New Models 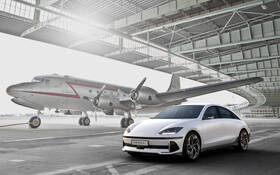 All-New Hyundai IONIQ 6 Debuts With Stunning Looks
Fresh off of winning the 2022 World Car of the Year award with the IONIQ 5 crossover, Hyundai is continuing its EV offensive with the debut of the new IONIQ 6. The first official pictures of the sleek four-door coupe—definitely a far cry from conventional sedans—were revealed on Tuesday by …
Features and Tips

Best Car Brands for Initial Quality in 2022 According to J.D. Power
The quality of new vehicles has significantly declined and the number of problems reported by owners is the highest in 36 years according to J.D. Power’s 2022 Initial Quality Study (IQS) released this week. Compared with 2021 results, the industry experienced an 11-percent increase in problems per 100 vehicles, resulting …
News

2024 Kia Seltos to Receive Significant Mid-Cycle Update
Originally introduced in North America two years ago, the Kia Seltos returns with no major changes for 2023. There are some minor equipment revisions, and the base price is up by $100, but that’s it. However, things will be different for 2024 as the small crossover from South Korea will …
First Drives