Ford’s first-ever electric crossover, the 2021 Mustang Mach-E, has a knack for making headlines since launching in November of last year.

Today is the day that reservation holders in the U.S. and Canada can officially place their orders. And there’s good news on top of that: the company has updated the performance specs and the Mustang Mach-E is more powerful than initially advertised.

“We remain dedicated to delivering on the promise of the Mustang name,” said Ron Heiser, Mustang Mach-E chief program engineer. “These better-than-estimated performance figures show that our team is squeezing every last bit of performance out of this vehicle so that it not only delivers Mustang style but Mustang soul as well.”

Ford makes no mention of the GT Performance model, however, which was announced with 459 hp and 612 lb-ft of torque. This one is still reservation-only and won’t be available until late summer 2021. It reaches 100 km/h in 3.5 seconds, quicker than any other Mustang in history.

By the way, if you have concerns about winter performance, you should know that Ford engineers put the Mustang Mach-E’s all-wheel-drive system to the test in extremely cold and hazardous conditions at the Smithers Winter Test Center in northern Michigan.

The 2021 Ford Mustang Mach-E starts at $50,495 in base Select trim. Deliveries are scheduled to start right before the end of this year. 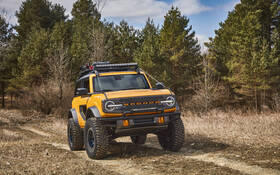 2021 Ford Bronco Unveiled at Last, Has Jeep Wrangler in Its Sights
After years of speculation and anticipation, Ford has finally unveiled the brand new 2021 Bronco . In case you didn’t realize already, this is the start of an all-out war with Jeep . Heavily inspired by the original Bronco (1966-1978), the latest generation is an authentic four-wheeler designed, engineered and …
New Models

Meet the Toyota Corolla Cross That May be Headed for Canada
Exactly one year ago, Toyota abandoned its plan to build the Corolla at a new assembly plant shared with Mazda in Huntsville, Alabama beginning in 2021. Instead, the Japanese giant envisioned making a brand new SUV that’s currently not part of the lineup and would slot between the C-HR sub-compact …
News

Hyundai Unveils New Manual Gearbox… With No Clutch
While more and more automakers choose to eliminate manual transmissions in favour of automatics—be it the conventional, dual-clutch or CVT type— Hyundai is announcing an industry first: a manual gearbox with no clutch pedal. The Korean manufacturer claims its new two-pedal, six-speed “intelligent Manual Transmission” (iMT) technology provides the joy …
News

2021 Ford Bronco Sport is More Than a Big-wheel Escape
The new Ford Bronco unveiled on Monday was arguably the most anticipated debut of the year. And the automaker doubled down on the fun with the introduction of the 2021 Bronco Sport. Except for the same first name and design language, these two vehicles have little in common, mind you.
Electric

Tesla Model Y is Even More Practical Than We Thought
Production of the highly anticipated Tesla Model Y began recently and the first deliveries will follow over the next few weeks. One reservation holder by the name of Eric Weaver spotted a unit in Scottsdale, Arizona and was even given access to it, after which he shared some pictures with …