The Car GuideNewsBuzzWatch: A Ride in Deserted New York City

Canada so far has not been as severely hit by the COVID-19 pandemic as other countries including even our neighbours south of the border. In the U.S., the virus has spread more quickly and the confinement measures put in place are often more drastic.

On social media, many people are sharing pictures and videos of the deserted streets, landmarks and attractions – places that would all normally be full of workers and tourists. Taxis and other passenger cars are a pretty rare sight, as well.

Here’s a short clip from the Associated Press that shows downtown New York and Times Square in particular:

Meanwhile, the team at the YouTube channel ShiftingLanes drove around a large portion of Manhattan Island (the biggest crowd was in front of a Whole Foods grocery store) as well as on nearby highways through the George Washington Bridge and Lincoln Tunnel:

Speaking of New York, state governor Andrew Cuomo wants to take advantage of all the cancelled events at the Javits Center—including the New York Auto Show—to turn the site into a field hospital during the coronavirus crisis. 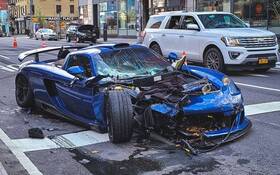 Idiot Wrecks His Modified Porsche in Deserted NYC Streets
We have a new nominee for the worst fail of the year, folks. While the streets of New York City are mostly empty due to the lockdown measures implemented by authorities to fight COVID-19, the owner of a Gemballa Mirage GT, which is an extremely rare and highly customized version …
News

Some Relief for Hyundai, Nissan and Toyota Customers in Canada
A few days after Ford , other car companies have announced special measures to help their existing customers and convince people to visit their showrooms to buy a new car during the COVID-19 pandemic. Hyundai First, Hyundai Canada is offering one- and three-month payment deferral options for lease and financing …
Electric

Tesla Model 3 With 650 Km of Range is Coming, But There’s a Catch
Last fall, Tesla increased the range of the Model 3 compact sedan to 402 kilometres in Standard Range Plus trim and 518 kilometres in Long Range and Performance trim. Still not enough for you? Don’t worry, the company is working on it. There’s just one problem: the plan is for …
Buzz

A Bunch of Still-new Cars Come out of 30-year Confinement
As reported yesterday, car sales are freefalling due to the COVID-19 pandemic. Dealer lots and showrooms are eerily quiet, and things might not get back to normal until a few more months. But that’s nothing compared to what happened to a bunch of Italian and French cars down in Argentina.
News

The Car Guide’s 2020 Best Buys: Toyota RAV4
Every year, The Car Guide publishes its Best Buys in nearly 30 different vehicle categories. Today we continue our review of the 2020 winners with a look at compact SUVs , a market segment where the leader is also the best-selling model in Canada. Allow us to present you the …