WHISTLER, British Columbia—When FCA introduced the all-new 2019 Ram Heavy Duty at the Detroit Auto Show last year, the numbers were quite impressive: up to 1,000 pound-feet of torque with the Cummins turbo-diesel engine and a maximum towing capacity of 35,100 pounds.

However, Ford announced last week that its 2020 Super Duty surpasses the big Ram in both departments.

So, what is the latter going to do? Well, it still has the Power Wagon, which is one of the most accomplished off-road pickups in the industry. And we’ve just put it to the test in the Canadian Rockies.

Not a Raptor, but…

In this segment, the Ford F-150 Raptor is most often used as the benchmark since it pioneered the latest trend of big, adventurous pickups.

The 2020 Ram Power Wagon has nothing to do with a Raptor, which remains the only truck athletic and solid enough to jump over sand dunes at high speeds. You see, there are different types of off-road pickups and FCA’s has a specific role to play.

As the original trail-blazing workhorse in the heavy-duty class, the Power Wagon is such a formidable product that both General Motors and Ford decided to respond with the new Sierra HD AT4 and Super Duty Tremor, respectively.

The package starts with a Ram 2500 and combines a 6.4-litre HEMI V8 with an eight-speed automatic transmission and Borg Warner 44-47 two-speed transfer case. Output is rated at 410 horsepower and 427 pound-feet of torque.

It then raises the suspension by two inches and adds heavy-duty Bilstein shocks, along with 33-inch off-road tires, available skid plates, locking differentials and a Warn winch with a 10,000-lb capacity.

Said suspension uses an innovative design called Articulink that makes the Power Wagon a lot more agile than competitors when tackling the toughest obstacles. With up to 660 millimetres of wheel articulation, the truck stays in contact with the ground much more effectively. And similar to the Jeep Wrangler, you can disconnect the sway bars to increase the flexibility of the chassis even more. At the moment, not a single rival can do the same.

The off-road program FCA had in store for journalists in Whistler was fairly simple. We left our hotel and drove to the base of a mountain where we first attended a technical presentation inside a big barn.

According to the automaker, the Ram Power Wagon is aimed at the most demanding workers who need to access remote locations traditional pickups can’t usually get to, like logging companies operating in dense, alpine forests and maintenance crews in charge of power lines. With a max towing capacity of 19,780 pounds and a payload of 3,987 pounds, the 2020 model is indeed strong enough to handle big jobs.

The plan for the day was to head to a lodge some 1,500 metres up in the mountain, have a short lunch and then go back all the way down. It was precisely the kind of exercise the Power Wagon is designed for. The trail was full of big rocks, mud pools and elevation changes—obstacles only a serious off-roader could overcome.

The Power Wagon never failed and didn’t even seem to mind the challenge. The articulated suspension proved handy during the toughest climbs and the four-wheel drive system was effective throughout the entire process, supplying all the necessary grip the slippery trail so sorely lacked.

The eight-speed transmission was up to the task, as well, though it produced some fairly alarming noises when the differentials were locked. We did appreciate the manual lever on the transfer case; it may not be state-of-the-art technology, but it helps the Power Wagon withstand abuse.

On the return trip, we drove on a small paved road and, unsurprisingly, the massive off-road tires and raised suspension made the truck pretty clumsy in corners. Also, the ride was much louder than with a conventional Ram pickup.

On a positive note, the cabin is spacious and generally comfortable. Like every other model in the lineup, the Power Wagon is available with a giant 12-inch centre display powered by FCA’s Uconnect infotainment system—one of the most user-friendly in the industry. What’s more, there’s a host of innovative off-road features, such as the 360-degree camera system giving drivers a better view of their surroundings.

At a time when everyone and everything is counted on to help reduce greenhouse gas emissions, it’s becoming pretty hard to justify a mastodon like the 2020 Ram Power Wagon. However, there are still a few people out there who actually need a gas-guzzling workhorse like this one and wouldn’t settle for anything else. No electric vehicle currently measures up.

2022 Honda Civic to Reportedly Debut Next Spring
So, when will we see a brand new Honda Civic ? A lot of enthusiasts and customers want to know. After all, it’s still the best-selling car in Canada and the current (tenth) generation is about to enter its sixth year on the market after launching for 2016. Multiple sources …
Electric 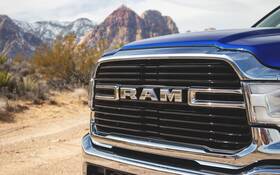 Meet the Toyota Corolla Cross That May be Headed for Canada
Exactly one year ago, Toyota abandoned its plan to build the Corolla at a new assembly plant shared with Mazda in Huntsville, Alabama beginning in 2021. Instead, the Japanese giant envisioned making a brand new SUV that’s currently not part of the lineup and would slot between the C-HR sub-compact …
News

2021 Kia Stinger Limited Edition Adds a Flashy New Colour
Despite being named the 2019 Canadian Car of the Year by AJAC, the fate of the Kia Stinger beyond the current generation remains uncertain. Still, there is a new addition for the upcoming 2021 model year. More specifically, the company is introducing a limited edition that stands out with a …
News

This $875,000 Brabus G-Class Has 888 Horsepower
The Mercedes-Benz G-Class has fans obsessed with its iconic silhouette and prestige, others with its surreal off-road capabilities and tremendous power. Sadly for some, the V12-powered G 65 did not survive the model’s transformation for 2019. The most potent and exclusive G-Class you can buy right now in Canada is …